S-Oil Corporation started out in the 1970s to deliver stable petroleum exports to a shaken market. Now it has matured into a global powerhouse that places a priority on product innovation and environmental accountability. 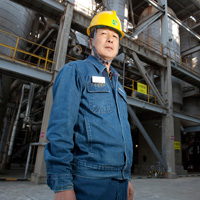 Although Korea is a voracious consumer of energy, ranked 11th worldwide, the 2000 Kyoto climate change agreement ushered in a renewed emphasis on energy conservation and emissions reduction policies. This was followed by Korean President Lee Myungbak’s highly touted “low carbon, green growth” policy directive, which he put through after taking office in 2008. This emphasis on clean and green has had huge ramifications for the nation’s oil refiners.

For its part, No. 3 refiner S-Oil takes pride in tightly controlling impurities in oil to achieve a very high-quality end product. It has earned praise from the government for its numerous greenhouse-gas reduction projects (reputed to make up 5.7 percent of all projects nationwide), which cut CO2 emissions by 160,000 tonnes a year as of July 2010. It has also set up a dedicated energy management department and committee to focus on mid- and long-term energy-cutting plans and activities. As a result, in 2009 alone S-Oil saved 14,467 tonnes of oil equivalent (TOE).

S-Oil is continually seeking ways to improve energy efficiency and environmentally friendly manufacturing, techniques and equipment, says Lee Yong-hee, senior vice president of operations, from his office in the company’s Onsan plant on the edge of Ulsan City, the hub of Korea’s industrial southeast.

S-Oil was founded in the depths of the 1970s oil shocks as a way to help stabilize the nation’s petroleum supply and by 1980 had achieved commercial production of 60,000 barrels a day.

As was – and still is – the norm in Korea’s ppalli-ppalli (“hurry, hurry”) society, the little oil firm had no time to waste. It started up lube base oil and petrol plants, then entered the local lubricants market, and soon began producing high-octane gasoline. On the strength of its lube base oil business, S-Oil went on to produce an array of high-end lubricant products that made it internationally competitive.

A joint venture with a subsidiary of Saudi state oil firm Aramco in 1991 assured S-Oil a stable oil supply for decades to come. It embarked on a second growth phase, building a large-scale bunker C oil cracking plant. A xylene plant capable of producing 650,000 tonnes of paraxylene opened in 1997, serving to ramp up its xylene (BTX)product line.

To stay competitive, S-Oil, like most South Korean refineries, is upgrading its plant to produce the types of light, clean products demanded by today’s market. In 2010, it broke ground on a 1.4 billion won (EUR 894 million) benzene, toluene and BTX plant addition, which went online in April. Located at the Onsan complex, the upgrade will allow S-Oil to turn out 900,000 tonnes a year of paraxylene and 280,000 tonnes a year of benzene when running at full capacity, boosting the company’s total production capacity to 670,000 barrels per day (bpd), up from 585,000.

In tandem with its production growth, S-Oil’s distribution network has mushroomed to include more than 1,860 service stations across South Korea, holding some 14.5 percent of the local market. But a sizable 60 percent of its business now takes place overseas, in markets stretching from Japan and China to Australia, India and the United States.

Senior VP Lee explains that, in response to rising energy prices and tough regulations, the BTX plant addition will use environmentally efficient equipment to the greatest extent possible, including three Alfa Laval Packinox heat exchangers, which have arrived after a nearly three-month-long journey from Europe by land and sea.

Construction of the BTX plant was streamlined by applying some existing schematics that called for using certain equipment and designs similar to those in existing facilities.

It’s an attainable vision, but it won’t be easy. According to the Korea Energy Economics Institute, local refiners must cope with myriad challenges, including oil’s shrinking slice of the energy pie due to a growing reliance on natural gas and nuclear power, the government’s heightened focus on alternative energies such as solar power and wind power, and a fast-ageing population that will shrink starting in 2019.

Through such expansions, however, the fixed costs associated with new facilities can be sidestepped and economies of scale realized. The latest addition comes only two years after S-Oil opened a new alkylation plant yielding 9,200 bpd of alkylate, a cleanburning petrol feedstock.

The application of Packinox heat exchangers is part of S-Oil’s energy-savings efforts. By recycling the thermal waste heat generated during refinery operations as process heat, these units help to reduce the need to burn fuel, which in turn reduces harmful emissions.

Once the new BTX plant goes online, the Onsan plant will contain seven of these heat-exchange units, including three at the new plant addition and two replacements of older units that had fulfilled their effective operating lifespan.

While shell-and-tube heat exchangers still have a place at S-Oil as a traditional solution, Lee Jin-woo, an Alfa Laval representative in Korea, explains that Packinox is used “in critical areas where there are heavy pressure requirements and large-surface heat exchanges” of more than 300 psi and 60,000 square metres, respectively. The design configuration of large metal plates welded into a plate pack and fitted into a larger plate vessel results in very efficient heat recovery in a compact size that can handle large throughputs.

“Alfa Laval is the only one that has the [Packinox] unit,” says HK Kim, an S-Oil engineering manager. “It has very high heat
efficiency, so we gain a lot on energy savings.”Although the Packinox units are nearly maintenance-free, Alfa Laval fields a local Korean agent, Lee Jin-woo, who is dedicated to servicing Packinox customers. Senior VP Lee Yong-hee describes him as “the communication door.”

“There’s a sense of words [between us] that Western people cannot sometimes understand,” he says, indicating his preference for doing business in his own language – something that Alfa Laval readily provides. In addition, a full complement of support staff is on hand in the country to respond to and service most requests.

Although some of business in Korea still gets done in smoke-filled taverns over barbecued pork belly and shots of fiery rice wine, there’s little secret to this long-standing relationship. As Kim puts it, “Alfa Laval’s technical service is very good. When we have a question, they provide help right away.”

The Packinox unit has very high heat efficiency, so we gain a lot on energy savings.