The Stickney Water Reclamation Plant, situated in Chicago, a major metropolitan area in the heart of the American Midwest, has the distinction of being the largest water reclamation plant in the world. Built in the late 1920s, the plant processes 2.4 to 5.3 billion litres of wastewater daily for the central part of Chicago and 43 suburban communities, populated with some 2.5 million people.

It’s a big job. Every time someone in that area uses a sink or flushes the toilet, that water goes through a complex cleaning process in order to protect the environment.

Untreated wastewater is a global environmental issue. Urban areas release about 150 to 250 million cubic metres of contaminated water per day into our planet’s topsoil, rivers, lakes and oceans, according to a report from the United Nations Environment Programme, the UN Human Settlements Programme and the UN Secretary General’s Advisory Board on Water and Sanitation, in partnership with the members of UN Water. This sewage causes disease, threatens food supplies and creates what are known as “dead zones” in the ocean.

In the United States, the federal government first made sewage treatment a priority in the 1940s, devoting dollars to build water treatment plants to serve the nation’s growing population. Today, those treatment plants need continuous updating to keep up with the wastewater demands of the country’s cities and towns.

The Chicago plant sets the standard by processing more water per day than any other wastewater plant on earth. When sewage enters the plant, it begins a 10-hour journey that rids it of more 90 percent of contaminants. Several sets of tanks separate heavier solids from lighter ones, and special protozoa are introduced to further separate the waste from the water. After the protozoa are removed (and reused for the next batch of wastewater), the clean water is channelled into the Mississippi river, eventually flowing into the Gulf of Mexico.

The solid waste spends a much longer time in the plant – up to 30 days. Alfa Laval developed two specialized decanters that double the plant’s capacity to process the wastewater sludge into a biosolid called “cake” that is ideal for agriculture. The cake reintroduces rich nutrients into the soil and is used to turn barren areas into parks, golf courses and farms.

The sustainable solution at the Stickney Water Reclamation Plant may seem like a drop in the bucket compared with all the untreated wastewater in the world, but it’s a drop in the right direction. 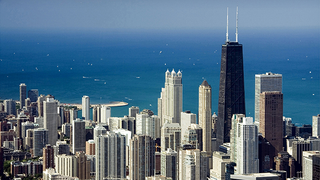